Things You Need to know

Throughout recorded history, humans have had the desire to decorate their living space. While our mediums and techniques were crude during prehistory, both paint and painting methods evolved tremendously in the millennia that followed. Today, the environmental impact of our paint is as important to us as its aesthetic appeal. What may seem like a simple product has, in fact, undergone many transformations over the years. Below, we recount a few of the major ones.

As long ago as 38,000 B.C., people used paint made from soot, earth, and animal fat to adorn the walls of their caves. In ancient Egyptian society (3150-31 B.C.), painters mixed ground glass or semiprecious stones, lead, earth, or animal blood with oil or fat. At the end of the 1200s, English house painters formed guilds to protect trade secrets and standardize their craft. A few centuries later, in the 1600s, new processes and technology revolutionized house paint.

In modern times, we don’t think twice about painting the interior or exterior of a house. In the days of the American colonies, however, such an act opened a person up to serious social disapproval. The Pilgrims, in accordance with their puritanical belief system, thought a colorful home expressed vanity and an excess of happiness. This idea wasn’t just bandied about; it was made law. A preacher in the Charlestown colony painted the inside of his house in 1630 and was subsequently accused of sacrilege, an actual crime in colonial society.

Yet as anyone who has studied Prohibition knows, making something illegal only increases demand for it. Subversive paint “cookbooks” started to circulate; their recipes advised using lime and ground oyster shells to make white wash (the so-called Dutch method), and then adding iron oxide for red or copper oxide for green. Edible ingredients, including milk, egg whites, coffee, and rice, also found their way into illicit paint recipes.

Between the 1600s and 1800s, most house paint used either oil or water as a base. Some colors worked better in oil, while water suited others better. Cost and durability were also part of the water-or-oil equation. Painters tended to use water-based paints on ceilings and plaster walls; oil paint was best for decorating joinery. In true American spirit, many people wanted their homes to look more luxurious than they really were, so they asked painters to make interior walls look like wood, marble, or bronze. Some customers requested ceilings painted like blue sky dotted with clouds.

A notable example of a home beautified with oil paint happened in 1638, when Ham House, in Surrey, England, was repainted The paneling and cornices were primed, given one or two undercoats, and then completed with a finishing coat. Painters of the time mixed pigment and oil, often with a mortar and pestle, to create a stiff paste – a method we still use today

The point of grinding pigment was to disperse it as fully as possible in oil. This was done by hand until the 1700s, which exposed many painters to white-lead powder and afflicted them with lead poisoning. Lead paint was popular mainly because it was durable; the stuff could retain color for centuries. Eventually, painters’ workshops were outfitted with air extraction systems that lessened their chances of inhaling too much lead powder. Astoundingly, it took until 1978 for the U.S. to prohibit the sale or use of lead-based house paint.

In the 18th century, England was a hive of paint innovation. Marshall Smith invented a “Machine or Engine for the Grinding of Colours” in 1718, and while we don’t know what it looked like or how it worked, the device sparked a countrywide interest in grinding pigment more efficiently. In 1741, the paint-making company Emerton and Manby boasted in an ad that it ground colors in “Horse-Mills,” which allowed the business to sell its product at unusually low prices. According to company head Elizabeth Emerton, “One Pound of Colour ground in a Horse-Mill will paint twelve Yards of Work, whereas Colour ground any other Way, will not do half that Quantity.” 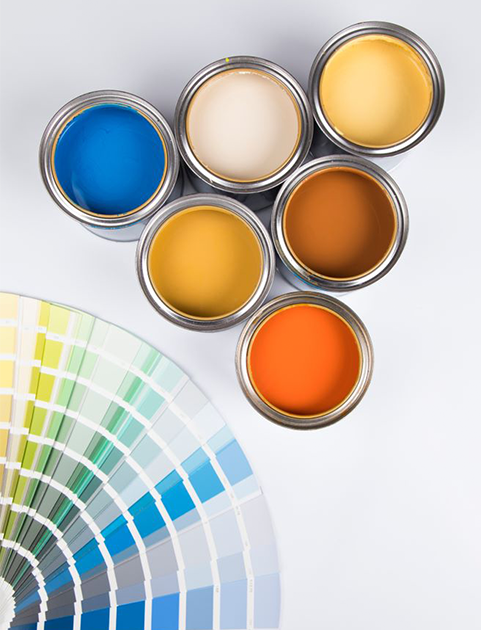 By the beginning of the 1800s, steam powered most paint mills. Around this time, white pigment made with nontoxic zinc oxide – a viable alternative to poisonous lead – was invented in Europe. (Only in 1855 did the “American process” of making zinc oxide paint bring it to the U.S.) Later in the 19th century, paint manufacturers began employing roller mills, like those used to process grain, and English painters’ guilds became trade unions. Making paint in large quantities was easier than ever, especially given the increased use of linseed oil as an inexpensive binder. The oil also made house paint a superior protector of surfaces. The product we know and love today had finally reached a tipping point: Decorating buildings with paint became the rule rather than the exception. Instead of just prettying up exterior walls, paint made plaster and sheetrock walls washable and kept wood from rotting or drying out.

In 1866, Sherwin-Williams, which would become one of the largest global paint makers, opened for business. The company invented ready-to-use paint, releasing its first product, raw umber in oil, in 1873. Several years later, cofounder Henry Sherwin came up with a resealable tin can. Not to be outdone, another paint-industry giant, Benjamin Moore, began selling its wares in 1883. In 1907, the company hired its first chemist and started a research department. Among Benjamin Moore’s many innovations, its computerized color-matching system, introduced in 1982, remains the most influential and impressive.

Not until the mid-20th century did house paint undergo another significant development. During World War II, linseed oil became scarce. In response to this shortage, chemists mixed alcohols and acids to make alkyds (artificial resins). These synthetics were cheap to make, lasted a long time, and excelled at holding color. They quickly replaced oil as a paint base. (Fun fact: Picasso and many of his contemporaries used house paint from time to time.) Most contemporary house paint is water-based (acrylic), though milk paint, widely used in the 1800s, is making a comeback, not only because its colors are subtle but also due to its eco-friendly nature.Like many consumer products, house paint has gone through countless changes since its inception. Yet its primary purpose has remained the same: to add color and joy– to our everyday lives.